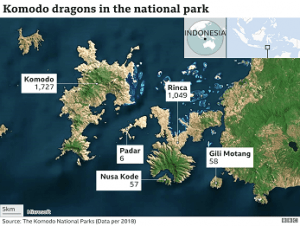 Komodo Island Indonesia is one of the 7 Wonders of the World (2011 voting results). Komodo National Park consists of 3 large islands, Komodo Island, Rinca Island, and Padar Island, as well as other small islands. The overall area of this national park is 1,817 Km2.

Komodo Island is located at the westernmost tip of East Nusa Tenggara Province. On Komodo Island, dragons live and breed well, according to the data, until mid-2009, the island is inhabited by about 1300 komodo dragons (+/- 2500 heads on all islands in TM. Komodo). The dragons are the largest lizard species in the world, with an average length of 2-3 meters, and a body weight of at least 90Kg. Komodo National Park consisting of islands is certainly separated by the sea. The underwater life here is no less beautiful. You can find 385 species of beautiful corals, 70 types of corals, 10 types of dolphins, 6 kinds of whales, green turtles, various types of sharks, and stingrays.

When you’re here, there’s a lot to do. Therefore make sure that your feet are fit and strong enough to get around the island. Within this island, you are invited to trek following a path that has been designed and safe. In Komodo Island, you have to climb Mount Ara as high as 538 m above sea level for 3 or 4 hours. Rinca Island, you have to trek for 1.5 hours. If you’re lucky, you can see komodo dragons attacking their prey, fighting, or walking slowly along the way. So curious about this island? Here are the facts that must be known before visiting Komodo Island.

Komodo National Park was declared a World Heritage Site and Man and Biosphere Reserve by UNESCO in 1986. The longest Komodo dragon ever recorded was 3.13m with a weight of 166Kg. It has 60 sharply serrated teeth about 2.5 cm long. Komodo dragon saliva is often mixed with a little blood because its teeth are almost entirely coated with gingival tissue and this tissue is torn during meals. These conditions create an ideal growth environment for the deadly bacteria that live in their mouths.

How to Reach Komodo Island

If you are from Jakarta, you must transit to Bali first. From Bali, the journey continues to Labuan Bajo, a small town northwest of Flores which is the gateway to Komodo Island. There are several airlines that serve the Denpasar-Labuan Bajo route, with a travel time of about half an hour.

or directly press the below button!

We are on TripAdvisor

We are new on Trustpilot